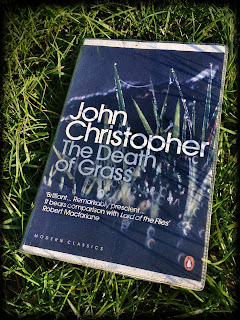 I had never heard of John Christopher and in turn, of course, I had never heard of his most famous novel "The Death of Grass".  I am rather thankful for our lovely library here in Chichester as this skinny little book looked the perfect size for a short read and the blurb on the back grabbed me right away.  I will warn you, this is not a happy book, it is by all accounts brilliant, however it is one of the bleakest books I have ever had the pleasure to read.

A deadly virus wipes out all types of grass, including crops, as it sweeps through Asia.  Horror stories of piles of bodies and cannibalism filter through to the media in the United Kingdom, but no one is really worried because the Government tell them they have a plan.  They have an anti virus that will wipe out the Chung-Li virus before it lays any further waste to civilisation.  The Government......are lying.  The Chung-Li virus makes it's way to every corner of the globe and slowly depletes the landscape of it's life giving grasses.  John Custance sets out from London with his family and gathers companions along the way as he plans to reach the sanctuary of his brother's farm in the formidable valley of Blind Gill.  The group must face tough decisions and brutality along the way as humanity reverts to it's rawest form of survival instincts and morality all but vanishes from its embrace.

The exploration of societal breakdown here is terrifying.  The swiftness with which people resort to barbarism to save themselves, to survive, is truly harrowing.  Even with John and his group's first leg of the journey we see them taken to the extreme of shooting their way through manned roadblocks, killing those that are trying to keep them confined in the doomed metropolis of London.  From the very start of the narrative is is clear that authority loses it's function, it is no longer of any importance.  The Government makes plans to drop hydrogen bombs on the largest settlements in England in order to kill enough people to make food supplies stretch that much further.  It is this final revelation that pushes society to the brink, people start to riot, they start to kill and it all becomes a case of the survival of the fittest.  This really is a world you would not like to set foot into, but is it one that could become our own future?  This is certainly the question Christopher is trying to raise here, a grave portent of things to come.

The journey that John takes is as much a metaphorical one as it is a physical one.  His experiences of brutality, rape, theft and life threatening situations build a big change in character as the narrative progresses.  He starts as a father and a loving husband and ultimately becomes a tribal leader, someone who must make hard, cutting decisions about life or death and about the usefulness of his followers.  Even his own family begin to fear him.  The biggest turning point for John is when he allows Pirrie, a vicious pit bull of a man, to execute his own adulterous spouse, a woman hell bent on sleeping her way to the top of the food chain.  She makes the fatal error of making a pass at John and Pirrie sees it as his right to finally do away with the wife that has wronged him for so many years.  It is this allowance that turns the dynamic of John's group, his tribe, into something altogether more sinister and Pierrie's role as somewhat of a lieutenant becomes set in stone.  John knows he needs this crazy rifle wielding psycho for his skills with a gun, and his tactical approach to defence and attack.  Even when Pirrie asserts his right to take a new wife, a young girl still captured in the throes of childhood, John allows him this right, against the behest of his own wife.  The old order of morality slowly becomes lost, and barbarism rises it's ugly head to the surface.

I found it truly fascinating that the loss of one type of plant could cause such devastation and would love to investigate further as to the validity of the claims made in the narrative.  Something as simple as the disappearance of grass snowballing out of control as the livestock that feeds on it dies, and in turn human food sources dwindle.  Regardless of the possibility of this, the idea in itself is inspired and gave birth to the apocalypse of this narrative.  It really is amazing what we take for granted, just imagine a world with no green fields, no crops, I am sure it would be remarkably barren and not at all easy on the eye (not to mention of course the famine that would rip through the land).

Having been written in the 1950's, during the tense era of the Cold War, it is no surprise that Christopher has leant towards the dramatic theme of apocalypse.  This particular apocalyptic vision is disturbing because we become our own downfall, we let go of the things that hold a society together and lose ourselves along the way.  England becomes a war zone, destroyed and made perilous by it's own citizens.  If this is not a warning worth heeding I don't know what is.

Maybe even more poignant now than it was when it was first released, "The Death of Grass" is a brilliantly written novel that allows us to investigate, to ask questions about and to fear the coming of an unexpected threat.  Easy to read, yet still written with skill and pace, this is the perfect novel for fans of H.G. Wells and even fans of J.G. Ballard's "Drowned World".  There is so much one could write about the themes, the tense relationships and the rapid progression of barbarism but it would take me hours and hours to write a piece worthy of this narrative, and some serious rereading of course.

This is a novel that should be considered by a wider audience as a modern classic and I am so glad that Penguin Modern Classics have brought this almost lost masterpiece back into print.  An amazing, albeit incredibly bleak, read.

Oh and just a warning, there was a film adaptation made of this novel titled "No Blade of Grass", don't bother with it, even the author couldn't sit through more than a couple of minutes of it as it was a heap of crap.  Read the book, don't ever, ever watch the film! 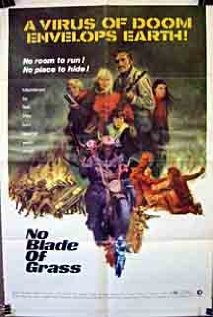 Although....the rather epic film poster did make me giggle, epic taglines...."No room the run.  No Place to hide".  I can see why John Christopher was not best impressed.  He imparted a bold and important message, and the film makers seemed to fail in capturing the same feeling.  Shocker!
Posted by Emspeanuts at 13:57

Emspeanuts
I am a slightly mad bookseller that spends far too much time reading and playing computer games, oh and conversing with ducks ofc.